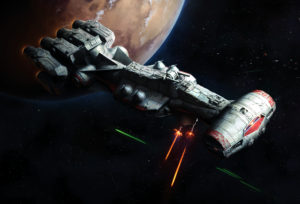 While I’m not sure how “Basic” this fleet is, I call it the Basic Sloane build because it’s primarily trying to use Sloane’s ability with TIE Fighters and Interceptors.  There are two Quasars, which may not be too common in most meta right now, but it will ensure you get plenty of squadron activations on turns 3 and 4.  Ruthless Strategists help to ensure you can quickly shut down enemy squadron threats and continue to use Sloane’s ability to destroy your opponent.

UPDATE- This build is no longer legal due to having the Commander on a Flotilla – if you want to run it you’d have to swap Dodonna to a combat ship. (Leaving it here for historical purposes though).

This is a build I had tremendous success with in 2016.  This was before Wave 5, so Relay didn’t exist yet, but it’s still strong regardless.  Using Adar Talon on Luke, and following up with Yavaris to give Luke the ability to attack 3x in a single round is incredibly threatening.   The multiple CR-90s also provide a threat, and between 8 squadrons and 5 ships, deployment advantage is strong as well.  Also, flying in the face of traditional Rebel Bombing builds at the time, I took Scurrg H-6 Bombers and did very well with them.  They are faster than B-Wings, and Grit makes them harder to stop as well.