As Legion gets closer and closer to reality, I find myself at a loss because I still haven’t decided on a color scheme for my armies!  It’s got me thinking more and more about how I’m going to approach painting and customizing the game once it arrives.

I’ve made the mistake in the past, of getting a game and refusing to play it until I’ve finished painting it.   There are several problems with this approach.  The most obvious of which is that it means I’ll have a brand new game but not actually be playing it for awhile.  The second problem is that I’ll be anxious to play, and perhaps be tempted to do rush jobs on my miniatures just so that I can get them finished and start playing.  Additionally, this doesn’t allow for an intermediate time of reflection.   For example, if I painted one squad of miniatures, then went to go play a game or two, I might see some other paint jobs that could inspire some variation on future models.   This helps establish some depth of variation and design.

So this time around, I’m going to assemble everything right away, and possibly even prime them immediately, but I don’t think I’ll have that much of a rush to fully paint everything before playing.   If you are torn on this, I could suggest a black prime and maybe a light dry-brushing, just to bring out the detail on your models to hold you over until you decide to sit down and hammer out a squad or two of troopers. 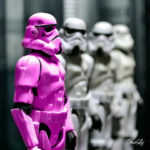 Do I want everyone to be standard?  I generally do, or at least I think I do.  When I got into playing X-Wing, I remember going nuts and painting a ton of my ships in all sorts of wild colors, like red X-Wings, purple TIE Fighters…  and now as I look back on these I think I was overanxious to do something different.   For now, I think I’d rather have the majority of my troops looking standard.  But there’s something to be said for doing a squad or two with some special paint scheme.

The key is (in my opinion) not doing a paint scheme that will overwrite something that’s likely to show up in the future.  I wouldn’t paint my stormtroopers black for example, because that might make them look too similar to Death Troopers if those show up.   Same goes for Chrome, as if they ever do sequel trilogy units, I wouldn’t want confusion with Captain Phasma.  So while I may not go so far as to do Pink Stormtroopers, I think some variation may certainly be a think.  Dirty stormtroopers, Sandy Stormtroopers, and maybe even some regular stormtroopers with a touch of snow on their uniforms for my Hoth terrain.  (To hold me over until snow

It looks like the figures don’t actually come attached to their bases.  This will help people who want to customize their bases have more freedom to do so.   The only risk with doing that however, is that it might look strange if you end up playing on new terrain at some point.   In my case, my terrain is all going to have a snowy theme, so weather I’m on Hoth, Starkiller Base, or the snow-crested mountains of Alderaan, my snowy terrain will be appropriate.   However, if I made all of my bases snowy, it might look strange when I eventually bring an army to a tournament and play on an urban setting, or an Endor map.  I may just paint all of my Imperial bases in grey, and all my rebel bases in tan, like I did for Imperial Assault.

Additionally, I won’t want any base decorations to cover up the sides of the bases.   This is specifically for the outer rings, which I plan to color differently for each unit.   One stormtrooper unit, for example, will have a red ring around it’s base.  Another might be blue, then purple, then green, etc.   This will prove helpful when units get close together and will help players differentiate between them.  This might be less of an issue for rebel units, which are more likely to have uniform variation between them.

In a recent videos by Sorastro, you can see the bases from below, and it appears that they have a recessed section that would allow for easy placement of a magnet.   This would be great for metal trays, and transporting armies.

This is something that could provide a ton of ease when transporting armies in a manner that will keep them mostly locked in place, and also look pretty cool to your friends.   The downside here, is that gluing a magnet into every miniature is likely going to be expensive, and time consuming.  It will also require a metal tray system for storage, which is great if you already have one from previous wargames, but if you are just getting started here with Legion and don’t have a system like this, you may want to wait a bit before magnetizing your miniatures.

Are you as excited about painting and playing Legion as I am?   It’s looking like February is going to be the month that we finally see it!   I’m hoping it’s not delayed!   There’s a lot of painting to do!