So Star Wars Celebration is over…. Well It’s been over for 2 days but I’ve been completely exhausted and had to get back to doing things around the house that have been neglected.  As a result I haven’t had much time to write.  I did a short recap video here:

It was a great experience for sure.  I’ll admit Sunday morning, that I honestly just wanted to stay in bed… but that quickly went away, as I was instantly reminded of how awesome the con was as soon as I arrived!

One of the coolest parts was being there so early in the morning as an exhibitor before they opened the doors.  Seeing Dave Filoni and Andi Gutierrez just walking around like normal people was almost surreal!   It was the calm before the storm, and I spent a good deal of time sitting at the food court trying to take it all in and commit as much of it as I could to memory.

One of the most important things this year was diversity.   Sitting at the Star Wars Show Stage, watching Kelly Marie Tran shoot T-Shirts at the crowd… I noticed an Asian woman behind me who was trying to get Kelly’s attention.   She said “Oh my god she’s so great!!!” and she meant it.   This was a powerful moment for me because I think everything suddenly came together.   I couldn’t help but wonder what it meant to her to have Asian women represented in Star Wars finally! That has been an important part of what Lucasfilm has been doing over the past few years.   As a white male, I’ve never really felt left out of the Star Wars Fandom – because almost everyone was a white male.  I could cosplay as anyone I wanted to, and didn’t need to wear a helmet to do so.  But this convention put everything into perspective for me.

The last time Celebration was in Orlando, was long before Episode 7 or Star Wars Rebels.   There were VERY few cosplay options for women… even white women.  The sheer volume of Slave Leia costumes were staggering.   And this year I was able to draw a stark contrast between the two time frames and really take a good look at what has changed.   There were ALOT of females at Celebration, and a lot of young girls were among them!   And a huge portion of them dressed up!   Sure there were some dressed up as Princess Leia, (and even a few as Slave Leia, though not nearly a majority), but there was incredible diversity this time around! 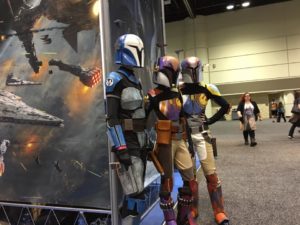 I saw everything ranging from Rey, to Jyn, from Mon Mothma, to Aurra Sing.   From Hera and Sabine, to Governer Price and Mandolorians.   It’s no longer taboo for females to wear an Imperial Officer’s uniform, and no longer to you have to wear a mask if you want to be a bounty hunter.   This year was amazing! 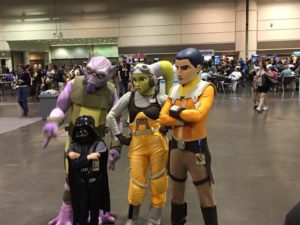